Telling the stories of the Green Army

It’s often the case when you win a Federal Government Project that half the people in the country are going to be against it. Not because it’s a bad policy, just because it isn’t their party or ideology. Wonderfully for us, that wasn’t the case for The Green Army Project. There is an overwhelming amount of good things about this project, it’s hard not to be impressed by it.

Trying to wrap all of the goodness that The Green Army did into one story was just crazy. When we got involved and talked to people involved, we realised the single thing that made The Green Army really powerful was the diversity. There was diversity in the participants that worked on the project – university students, job seekers, environmentalists, gap year students. There was a diversity in the project hosts – councils, environmental groups, private sector. All of these people coming together to make their local community and the environment better. It’s a wonderful thing.

It was because of this, that our idea was based around diversity and sharing the stories of the Green Army. The line that resonated strongly through research was The Green Army – Local People, Local Projects.

Put simply, The Green Army a work and training scheme for 17-24 year olds to get experience in the environmental sector. This group is one of the most connected audiences the world has seen, yet ironically, probably one of the hardest groups to connect with. Our strategy was to avoid communication that talked ‘at’ them. From early on we decided that the best way to motivate and engage them was to show what was going on and encourage them to join in.

How many ways can you tell a story? Based on the diverse target market, we visited Green Army sites all over Australia with a really tight crew of around 5 people and captured stories of the participants in film, audio and in still photos. After this, we condensed and edited all of the content down into ‘snack size’ stories and prepared for all media from TV, print and outdoor to digital, radio and social. During the campaign, we produced and launched 23 pieces of film, 312 pieces of print artwork and 15 different digital media builds.

The level of engagement with the work has been huge, with applications from participants surging to over 7,000 in just 3 weeks, and more than 24,000 in 12 months (smashing the original Government target of 18,000).

Based on this success, we were asked to manage The Green Army’s social media platforms across  Facebook, Twitter and Instagram. Again, there were so many great stories of environmental transformation, but we focused on a content strategy that looked to enable our core influencers. In three months, the Green Army’s online community grew by 92%, and we’re so proud of a 32% increase in brand sentiment..

The campaign was delivered through transit advertising across Australia.

The look and feel of the campaign was translated into stationary and business cards.

The collateral included a suite of flyers and fact sheets for information sessions and downloadable resources. 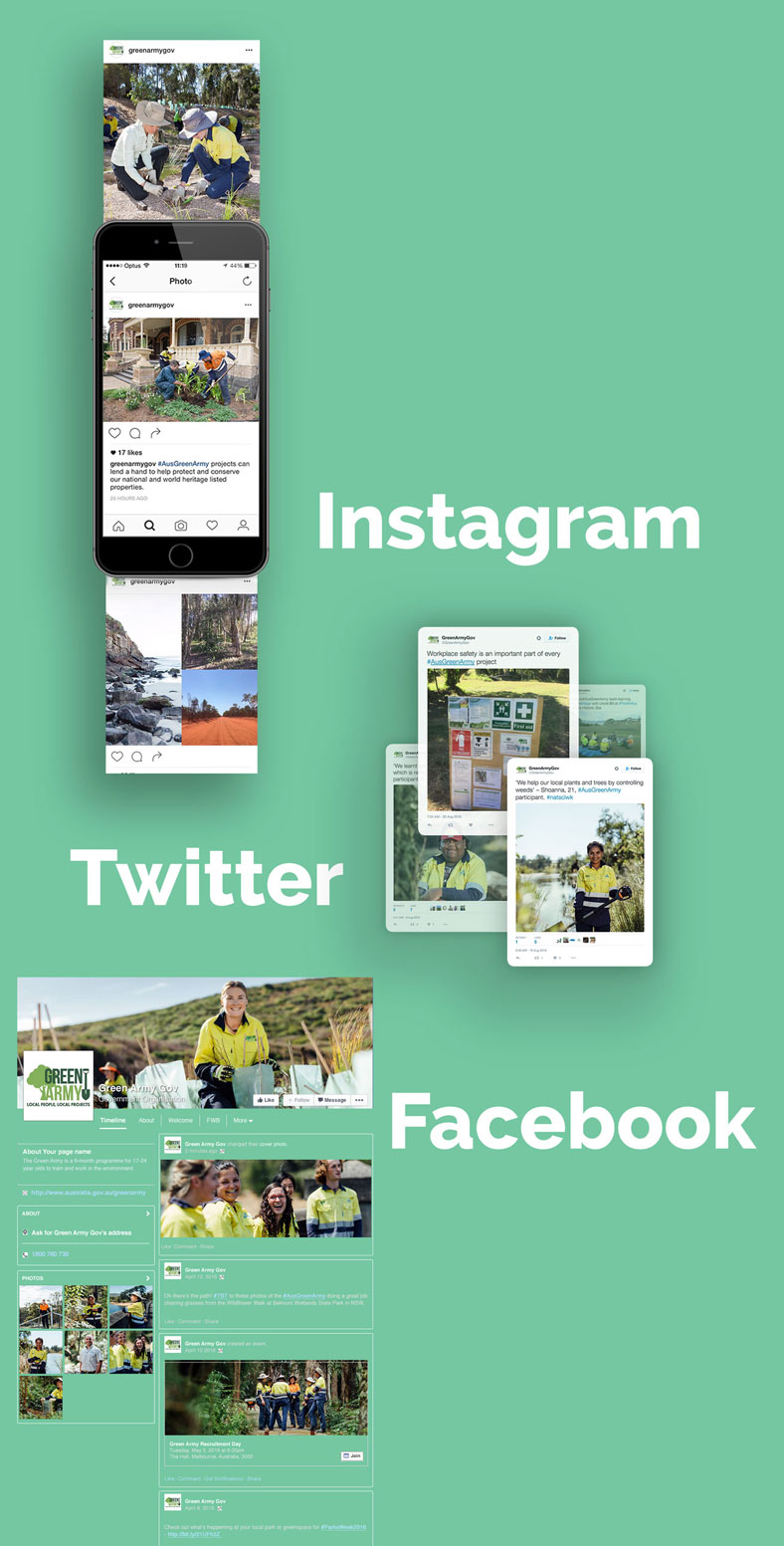